“A good traveler has no fixed plans and is not intent on arriving.”  Lao TsuLao

As I stated in my previous post (East Sea – Port Hupo) Ara, my Korean friend, had expertly planned an itinerary that in the limited time available would give me the opportunity to view rural Korea as well as visit several splendid historic and cultural icons.  Gyeongju, the ancient royal city, she confided was on every high school student’s eventual tour list.  She had been on one such field trip and remembered the experience fondly as the first time she’s been anywhere with friends and teachers but no parents along – that was so exciting, she admitted.

Well, it was equally exciting for me I can assure as from the very first view I knew there would be things to see and do that would be worthy of banking in my memory vault.  The building below with its inner pagoda profile was striking in its imaginative architecture as you’ll surely concur; it’s a popular observation tower completed in 2007 along with Gyeongju Expo Culture Center. 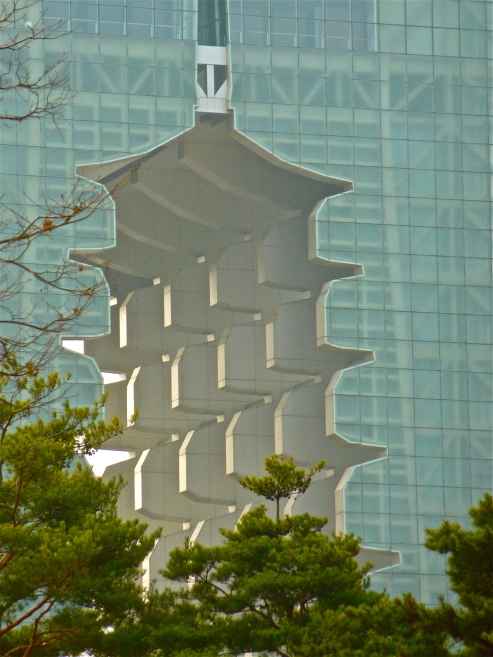 The structure is the equivalent of a 30 floor building and is the location since for numerous music festivals and other cultural events.  At night strobe lights and a kaleidoscope of colours makes for a magical spectacle.

Among the many featured historic sites, Bulguksa Temple is atop any list for  pilgrims and foreign travellers.  Within its walls are kept seven of the catalogued National Treasures and the temple itself is classified as Historic and Scenic Site No. 1 by the South Korean government.  The entrance to the temple, Sokgyemun, has a double-sectioned staircase and bridge (National Treasure No. 23) that leads to the inside of the temple compound.

The stairway is 33 steps high, corresponding to the 33 steps to enlightenment.  I climbed with great anticipation and still awaiting the favourable results, yet to come hopefully.

The temple is considered  a masterpiece of the golden age of Buddhist art in the Silla Kingdom and currently an important  temple of the Jogye Order of Korean Buddhism.   The Silla Kingdom grew from one small tribal enclave to eventually rule over almost the entire Korean Peninsula lasting just short of one thousand years from 57 BC to 935 AD.   Buddhism, introduced in the 6th Century, played a significant role in strengthening royal authority, unifying the people, becoming the foundation of the area’s art, tradition, and culture.    In comparison  Western Europe was then well into what has been referred to as the Dark Ages, mired in centuries of superstition, wars and famine. 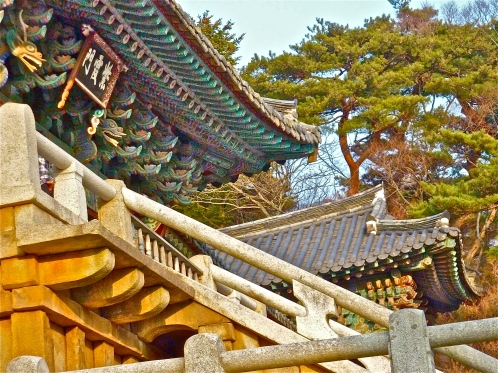 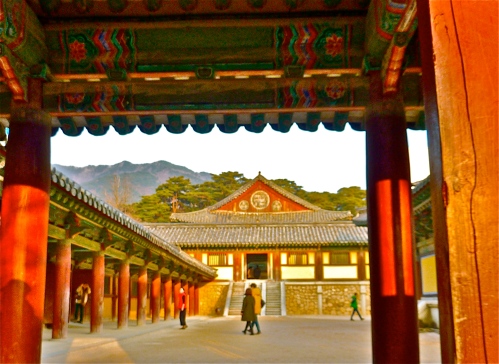 Bulguksa is a virtual cornucopia of history, art and culture, in 1995 it was added to the prestigious UNESCO World Heritage List.   In fact there is so much to be seen and appreciated in and around the town in 2000 five districts were added to the list of World Cultural Heritages under the title ‘Gyeongju Historic Areas.’  The following photos require no explanation. 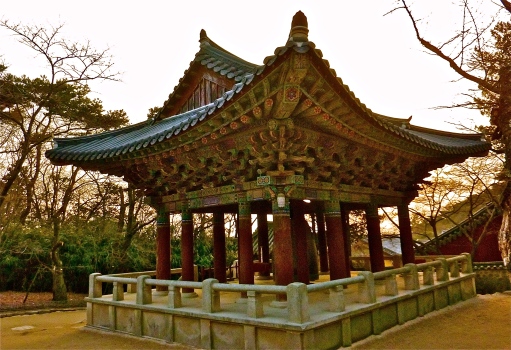 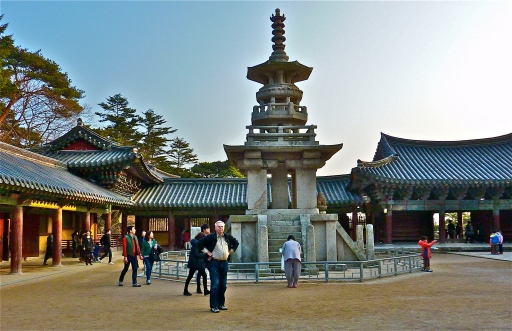 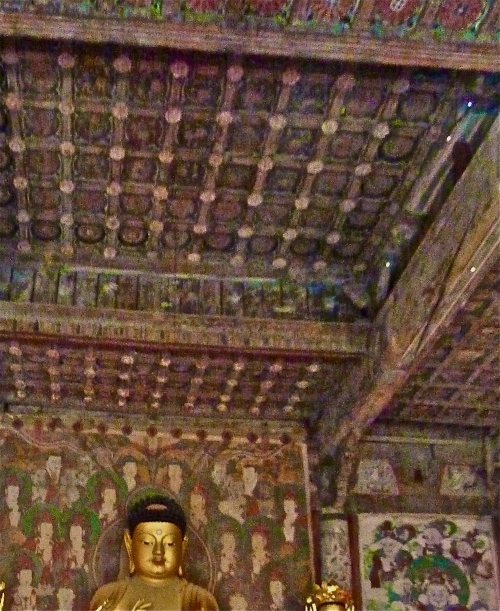 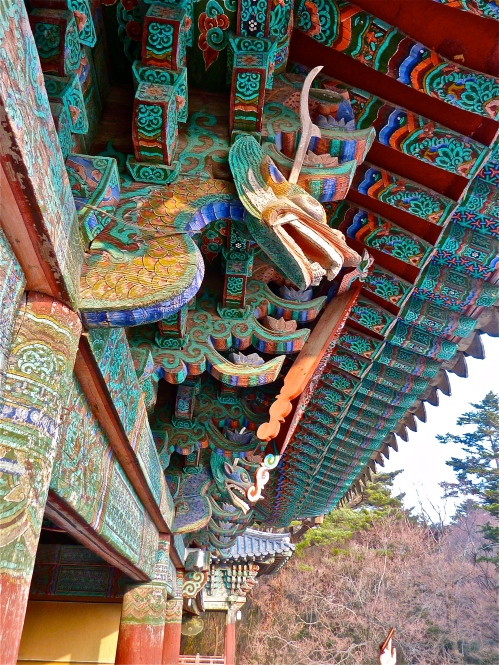 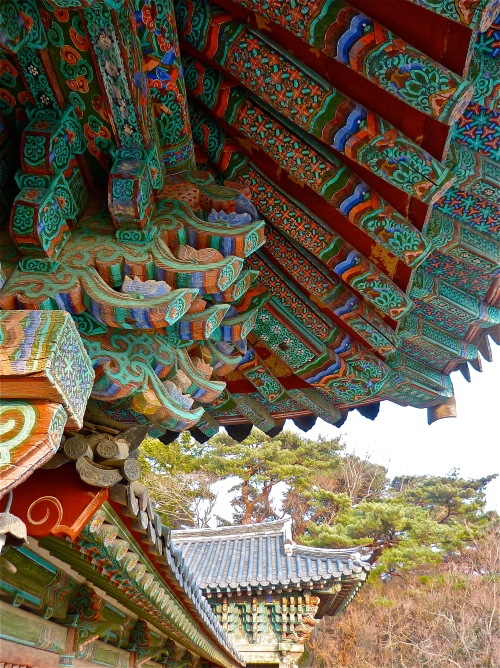 Beyond this ornate gate private quarters for monks and temple staff. 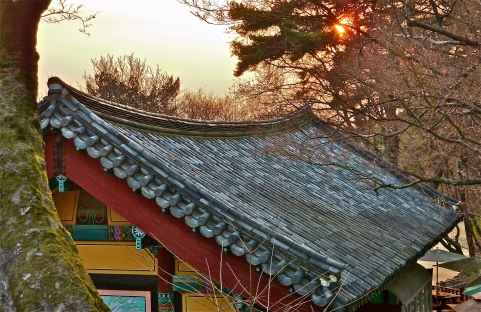 The temple is surrounded by ample grounds, peaceful and propitious for quiet contemplation.

The ornate, uplifted roof entrance to Seokguram Grotto (only four kilometres from Bulguksa Temple) examplifies classic Korean architecture; it sits atop a steep hillside and affords a vast panoramic vista of Gyeongju far below.

It is promised that banging the huge bell with the wooden log is a guarantee of good luck to the ‘banger’.  I wished to return soon and I have a strong feeling it might just be ringing true in the wind. 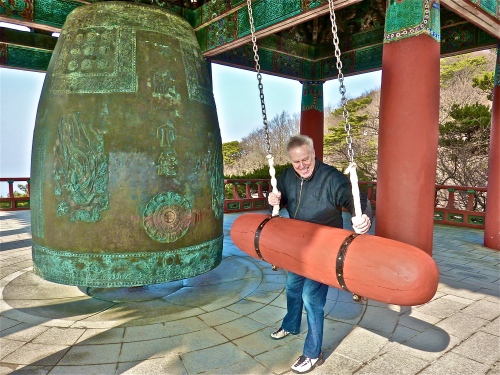 Buddhist monks are seen everywhere – I couldn’t help but ponder the difference between Asia and elsewhere, in Europe in particular, where ancient monasteries are closing for lack of vocations.   Even within the walls of fabled Mt. St. Michel where for centuries hundreds used to pray and meditate presently only a handful of monks remain to keep a flickering  candle of faith burning. 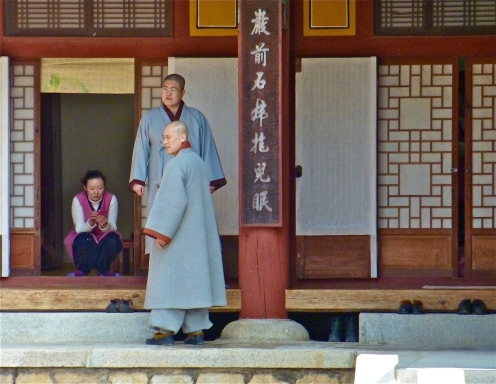 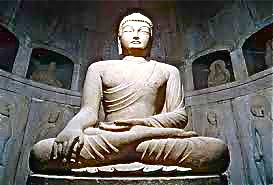 The paths leading to and from the grotto are steep and rugged but they don’t deter the devout pilgrims, not matter how hold or in poor health.  I couldn’t help but be full of admiration as I spotted the gritty efforts of so many who came seeking a spiritual help for physical ills.

Finally, before leaving I slaked my thirst at a fresh spring water fountain.  I look forward to seeing you at my next entry when I’ll share some spectacular, beautiful photos.  You’ll not find fault with my promise, I promise. 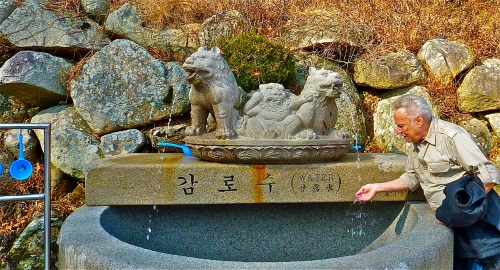